We have been fortunate to publish two articles in last month’s PLoS Computational Biology. The first one was on resolving the ortholog conjecture, and I have written about it at length in a guest post on Jonathan Eisen’s blog.

This post focuses on the second paper, “Quality of Computationally Inferred Gene Ontology Annotations”. Stimulated by Jonathan’s “Story Behind the Paper” series, I am going to try to put this work too in perspective.

The trouble is that we know little about the quality of these annotations, especially the >98% inferred computationally. The community perceives them as unreliable—at best suited for relatively coarse exploratory analyses, such as term enrichment analyses (and even those are not without risks).

At the same time, virtually everything we know about the function of genes in non-model organisms is based on computational function inference.

Outline of strategy (figure 2 of the paper)

Reliability measure: not as straightforward as it might seem

At first sight, these definitions might seem quite mundane. But let’s have a closer look at the reliability measure, which proved to be much more tricky—even contentious, see next section—to devise than we had anticipated.

The big complication is due to the “open world assumption” of GO—the notion that GO annotations are incomplete, and thus “absence of an annotation does not imply absence of a function”. And because genes can have multiple annotations, even the minority of genes that are experimentally annotated cannot be considered as complete.

Such “negative results” can be captured in GO annotations using the NOT qualifier. But a search on EBI QuickGO reveals that <1% of current experimental annotations are negative annotations. In part, this state of affairs is a consequence of the general bias against negative results in the literature. Also, it is harder to make definitive statements about absence of function than about presence of function, as absence must be ascertained under all relevant conditions.

The GO consortium has recognised the need for more negative experimental annotations, but it will take a while before the current imbalance significantly changes. Meanwhile, we felt that we needed an additional way of identifying poor annotations.

If you recall our definitions above, we include in the reliability measure a penalty for electronic annotations that are subsequently removed from the database (an annotation present in release n has disappeared in release n+1).

However, electronic annotations can disappear for reasons other than being wrong. As Emily Dimmer and colleagues from UniProt-GOA pointed out to us, removals can reflect tightening standards (e.g. by setting more conservative inference thresholds), responses to changes in the GO structure, or temporary omissions due to technical problems (e.g. integration failure from external resources).

This discussion also highlights the importance of finding an appropriate name. Because a removal does not necessarily implies an error, calling our measure “correctness” or “accuracy” would have been too strong. Conversely, calling our measure “stability” would also not have been appropriate, as it goes beyond mere stability: electronic annotations that are left unchanged do not increase the reliability ratio of a term; only experimental confirmation does.

One main finding of our study is that electronic annotations have significantly improved in recent years. A way of seeing this is to look at the following interactive motion plot (click on image to load the flash app):

Better yet, we also observed that the reliability of electronic annotations is even higher than that of annotations inferred by curators (i.e. when they use evidence other than experiments from primary literature):

I am glad that the work has been picked up by Iddo Friedberg on his blog (see also the associated discussion on Slashdot). I’ll answer some of Iddo’s questions in the comment section of his blog.

Looking forward, we view this work as an essential step toward our long-term aim of improving computational function inference. Indeed, one thing that seems to often hold in computational biology is that there is no point coming up with a faster or more clever algorithm as long as one has not identified a dependable objective function (or assessment strategy), such as the quality measures introduced here. As late management-guru Peter Drucker said, “there is nothing so useless as doing efficiently that which should not be done at all”. 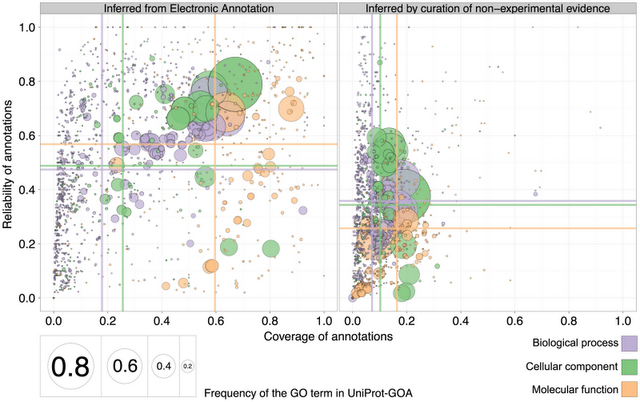 Electronic annotations are not as unreliable as often assumed.

More info: Here’s a link to the paper and a link to the supplementary figures. If you are interested in further developments, you can follow me on Twitter at @cdessimoz.