This post accompanies a recent publication and is part of our series story behind the paper, inspired by Jonathan Eisen’s series of the same name.

One fundamental step in sequence analysis is the identification of homologous sequences, sequences related through common ancestry. There are many different ways of identifying homolog but they broadly fall into two categories: all-against-all comparisons and clustering.

The all-against-all approach aligns every sequence with every other one. This is straighforward to implement, relatively sensitive, and robust to variations in sequence lengths. The main downside of all-against-all comparisons is the quadratic computational cost with respect to the number of sequences.

In contrast, clustering works by using one representative sequence or profile per homologous family of genes (clusters), thus limiting the number of required comparisons to one per cluster. Assuming a fixed (or nearly fixed) number of clusters, the computational cost is (nearly) linear in the number of input sequences. Clustering methods however tend to miss more homologous relationships than the all-against-all.

Can the sensitivity of the all-against-all be achieved at the speed of clustering?

The OMA database—developed in our lab—currently relies upon an all-against-all. With 8,798,758 protein sequences from 1706 genomes in the latest release, this represents 38.7 trillion alignments. We could probably cope with a few thousands genomes more, but will struggle to get to the next order of magnitude with the current pipeline.

Furthermore, it is difficult to accept that as we increasingly sample the protein sequence universe, even though we know more and more about its diversity, the marginal computational cost of adding sequences goes higher, not lower.

In this project, we thus set out to try to achieve the sensitivity of the all-against-all at the speed of clustering.

In practice, however, things are more complicated. Homology can be difficult to ascertain for very divergent sequences. Furthermore, homology is not always transitive due to insertions, deletions, fusion, fissions, and other events that may cause inconsistencies in terms of matching residues across multiple homologs. This figure illustrates these problems and outlines the ideas we implemented to address them: 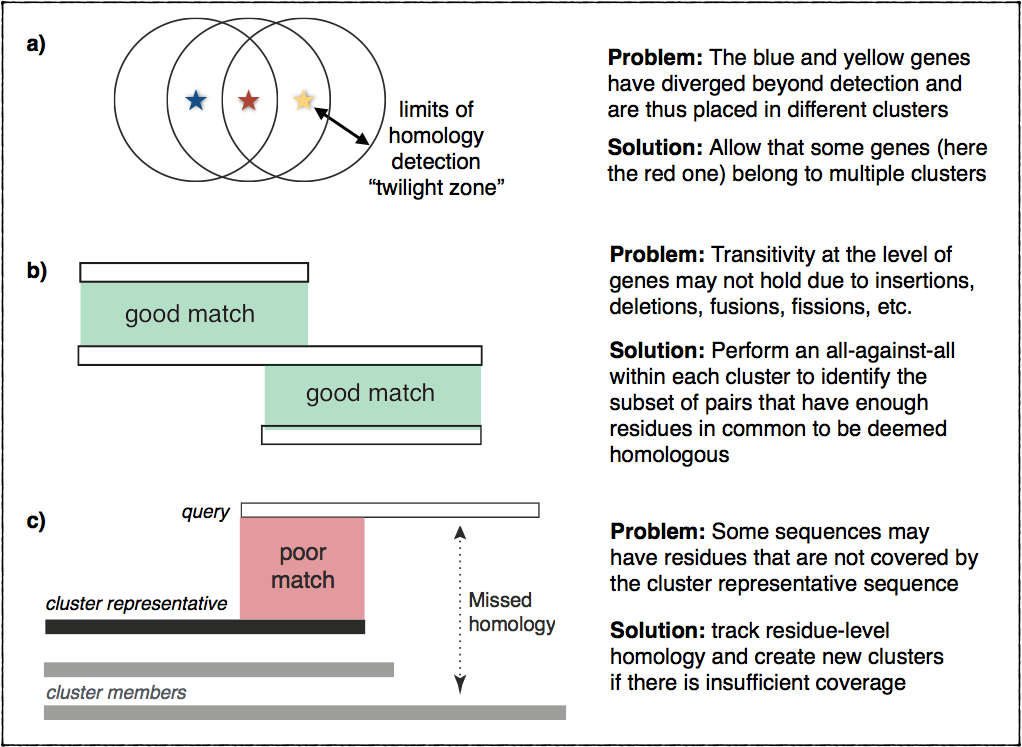 Putting together the ideas outlined in the figure above, we were pleasantly surprised to see that clustering can indeed be both sensitive and fast. We obtained 4-5x speed-ups across various datasets while recovering ~99.9% of all homologous relationships identified through all-against-all.

In comparison, general purpose clustering approaches such as kClust or UCLUST—which admittedly have not been designed to identify distant homologs effectively—only recover ~10% of all homologous relationships. They are, however, several orders of magnitude faster.

The results of our proof-of-concept implementation are thus very encouraging. We have plans to follow up with a long list of refinement ideas, many of which we discuss in the manuscript. One essential refinement will be to parallelise the new approach. This is not as straightforward as with all-against-all compraisons, but we think it can be done.

Meanwhile, the serial variant is available as part of the OMA standalone package.

My internship experience, by Anna Sueki

Note: this is another interview in our series “Life in the Lab”, which gives unedited accounts of students who have spent time with us. —Christophe

Please introduce yourself in a few sentences.

I am Anna Sueki, 3rd year Biochemistry student at UCL. I did my summer internship at Dr. Dessimoz’s lab during summer 2014. I’m originally from Japan, but grew up in Singapore and Germany.

Why did you choose to join the lab?

During my second year, I took a module called “Computational Biology” and I really enjoyed learning programming and other computational aspects in biology. Dr. Dessimoz was one of the lecturer for that module, and since I found his lectures interesting, I applied to his lab for this summer internship.

What project did you work on (and for how long)?

My project was “Synteny visualisation in the OMA browser”. This was for the new release of the OMA browser, and I created the new synteny viewer function within the browser to show neighbouring genes of the entry gene and its ortholog relationships. I worked for 3 months (from June to September 2014) during my summer vacation.

What came out of it?

With the help of other members in the lab, I could produce the synteny viewer function, and it will be implemented in the new OMA browser. Also, explanation of this new function and an example was included in the paper for new OMA release.

Other than this actual project outcome, I learned about how computers and their systems work, programming of Python, and how to use Python’s web framework Django. 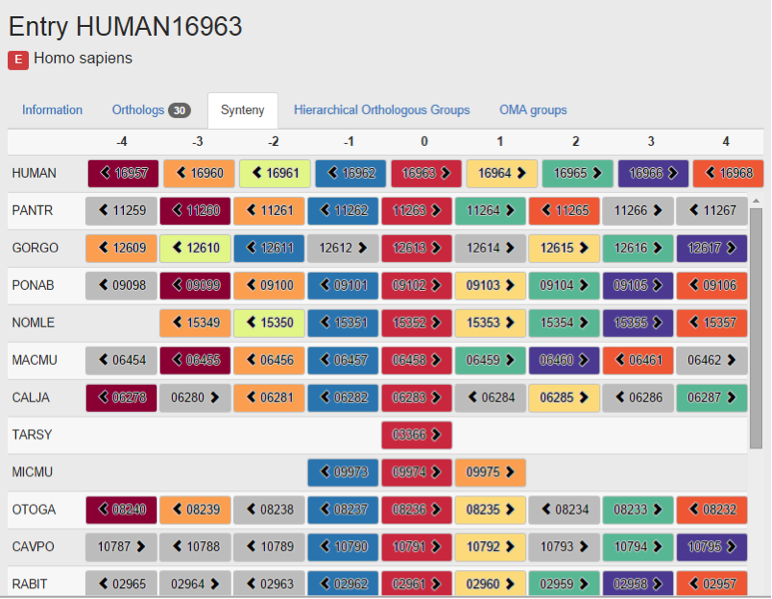 Was there any highlight or low point you’d like to share? Personally, I enjoyed the lab retreat in Zurich a lot. It was nice to see the members in Zurich who I saw only through video meeting every week. Also I got many helps from Zurich members through the chatting system, especially Adrian and Clement.

What is your overall impression and would you do it again?

I really enjoyed my time in Dr. Dessimoz’s lab, and I learned a lot during these three months. I started without barely any knowledge in computer science but through this summer, I found out that I like learning coding and other computational skills. If I can achieve another chance, I would love to work with Dr. Dessimoz and other members again!